Disclaimer: The Blog on Indian Banking Sector is not a recommendation to buy / hold / sell any stock. The published post is for information purpose only. The intention to share write ups on this blog is to create a repository of ideas so that investors can have a look at various frameworks & approaches. Please read the detailed disclaimer at the bottom of the post.

Sweden Banking Crisis Of The 1990s.

This blog is in continuation to our blog series on Banking Sector. We all know about the financial crisis of 2008, but very few of us are aware of the banking crisis of Sweden of 1990s. Sweden faced biggest economic crisis post World War II in the early 1990s, and banks were at the centre of the crisis. Many years of regulated low interest rates had resulted in considerable overinvestment in Sweden, which led to asset bubble. This article focuses on the causes of the crisis, its effects on the Swedish economy and how Sweden effectively came out of the crisis.

Prior to the crisis of the 1990s, Sweden was known as a rich welfare state, immune to the high unemployment that plagued many Western European economies since the 1970s. However, this was the outcome of capital account regulations which isolated the country from the rest of the world.

In the mid-1980s, Sweden’s financial system underwent major deregulation, which made Sweden financially integrated with world financial markets. This deregulation was the main impulse behind a strong boom-bust cycle for Sweden.

The strong political position of the labor unions led to employment emerging out as major policy goal. Hence, prior to the crisis of the 1990s, Sweden was known as a rich welfare state, immune to the high unemployment that plagued many Western European economies since the 1970s.

After the 1985 election, Swedish central bank ‘Riksbank’ abolished the quantitative controls on lending by commercial banks. This was the 1st move towards the build-up of the crisis. Historically, the households and the companies were restricted in their choice of portfolios due to the regulations introduced in the 1950s. The tax system favoured borrowings and prevailing inflation and expectation of further high inflation compounded these portfolio imbalances. The commercial banks faced more aggressive competition for market share, to which they adjusted by expanding credit.

The outcome of these incentives led to rapid debt growth between 1986 and 1988. We can see the Annual Growth Rate of the Volume of Credit in Sweden during 1985-94 period. 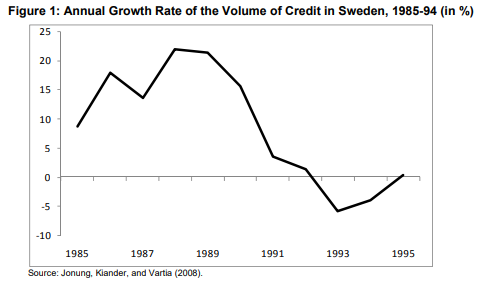 A large portion of this new credit was channelled into property and share markets. This led to rapid increase in house prices. This rise in assets was further used as collateral for additional borrowing! 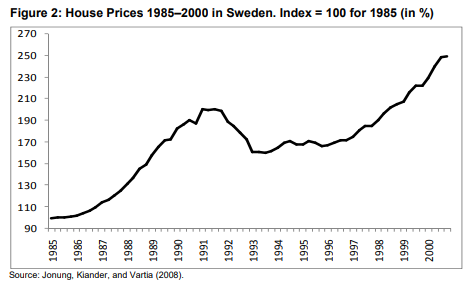 This process was fuelled by rising rate in inflation. Inflation expectations followed the rise in the inflation rate, which peaked in 1990. 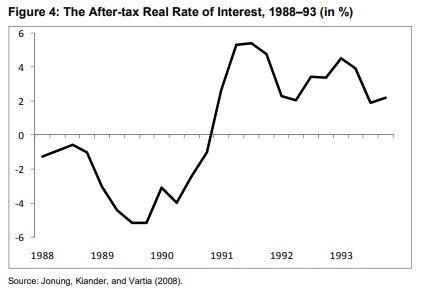 This negative interest rates made it tempting for taking on additional loans for investments and consumption. This resulted in creation of a credit bubble in the economy. Consumption led to overheating of the economy, with households consuming more than their disposable income. Government tax earnings also witnessed sharp growth during the boom period as the consumption and income growth led to higher tax revenues for the government.

The rise is real assets led to further growth in construction sector and hence the labour market saw strong demand. The unemployment rate went to as low as 2% in the end of the 1980s. Due to this rapid domestic expansion, exports declined while imports soared, which further led to worsening of the current account.

This expansionary impulse was not countered by any contractionary policy until 1989 – 1991.

Sweden introduced a major tax reform in 1990 – 91, known as the ‘the tax reform of the century’, which favoured savings and worsened the conditions for loan-financed investments. Also, their capital account controls were abolished in 1989, prompting an outflow of capital from Sweden. Additionally, international factors also forced Swedish interest rates upwards. Reunification of Germany led to raising of German and hence European interest rates, and hence to defend the krona rate, the Riksbank had to raise interest rates in Sweden by more than rates in the rest of Europe.

This increase in interest rates led to decline in the price of assets. This led to reduction in wealth as these assets were financed by loans whose nominal value remained unchanged. This led to increase in number of bankruptcies.

Households adjusted their portfolios by reducing consumption and by increasing savings. The savings ratio rose from a negative level at the end of the 1980s to ~8% in 1993. This change in private savings was a significant feature of the crisis. Unemployment rate also had increased from ~2% to ~8%.

The domestic situation undermined the credibility of the pegged krona rate. The authorities were trapped in a situation where external conditions (the currency crisis) required contractionary measures, while domestic considerations (the banking crisis) demanded an expansionary policy. The more the Riksbank tried to defend the pegged krona rate by raising interest rates, the deeper the domestic crisis became.

In September 1992, the Swedish government intervened to prevent a major financial collapse by announcing a blanket guarantee for the liabilities of the banking system. A bank support authority was set up a few months later, and two banks, Nordbanken and Gotabanken, ended up under government control.

Attempt Of Taking Control Over The Krona :

The Riksbank defended the krona by significantly raising its overnight rates. For a very short period, the marginal interest rate (the overnight rate) was 500%! However, government’s defence for Krona couldn’t last longer and it came under massive speculative attack. Finally, a floating exchange rate was introduced, which led to depreciation of the Krona. However, this marked the end of the crisis and the beginning of the recovery of the Swedish economy. The depreciation of the Krona helped Sweden increase its exports. Exports accounted for 28% of GDP in 1992, which increased to 45% of GDP by year 2000! Other factors that helped the exports improve were wage moderation, productivity improvement, and Sweden’s entry into the European Union in 1995.

The fall of Krona in November 1992 meant the end of pegged exchange rate for Krona and allowed the Riksbank to move towards lower interest rates. The Riksbank set the target inflation rate at 2% (+/- 1%). We can see in the above Inflation Rate chart how the Swedish inflation rate declined suggesting the credibility gained by the new monetary policy regime.

The crisis had led to huge fiscal deficits. The newly elected government in 1994 decided to implement large cuts in government expenditures and increased taxes. This led to rapid decline in deficit as a share of GDP and government debt to GDP ratio.

Swedish banks were heavily dependent on foreign financing. To make sure this funding doesn’t dry up, the Swedish government made a press release in September 1992 that the depositors as well as other counterparties of Swedish commercial banks and Swedish financial institutions in which the State was involved were to be fully protected from any future losses on their claims. This guarantee helped in gaining the foreigner’s confidence in the solvency of the Swedish commercial banks. This blanket guarantee helped the Riksbank to support commercial banks including those on the brink of insolvency, regardless of their financial position.

There was political unity amongst the ruling and the opposition parties, which also helped in the Blanket Guarantee to become a success. The leadership of both the political parties knew that behind the crisis lay a legacy of policy measures taken by both the parties when in power. This political unity helped in passing resolutions timely through the parliament.

The Bankstödsnämnd, a Bank Support Authority was established, which was to be given open-ended funding, instead of a fixed predetermined budget. This step was taken to avoid the risk of the Bankstödsnämnd being forced to go back to the Riksdag to ask for additional funding at a later stage. The Bankstödsnämnd was set up as an independent agency at a distance from the government, the Riksbank and the Finansinspektion (the financial supervisory authority). This helped to improve the credibility of the bank resolution policy.

Banks that turned to the Bankstödsnämnd with requests for support were obliged to give full disclosure of all their financial positions, opening their books completely to scrutiny.

Saving of Banks, and Not the Owners of the Bank :

The stressed banks were divided into three categories depending on their intensity of stress levels. Each of these three categories was treated differently by the Bankstödsnämnd. Two bank asset management corporations (AMC) were set up to manage the Non-Performing Assets. In the long run, i.e., about 10–15 years, the two bank AMCs proved to be successful in the sense that the fiscal cost of supporting the financial system was roughly balanced by the revenues received through the liquidation of the asset holdings of the bank AMCs.

The monetary and fiscal policies played very important roles in helping the system recover fairly rapidly. Once the krona was floating, monetary policy was able to focus on domestic conditions. The Riksbank gradually lowered interest rates. The vicious circle of falling asset prices was halted. The fall in interest rates eased the pressure on the banking system, as the economy started to recover. In terms of Fiscal policies, the government’s bank support policy contributed to the rise of the deficit.

Overall, the Swedish bank resolution policy is regarded successful. Some of the reasons being: