Disclaimer: The Blog on ‘Edible Oil’ is not a recommendation to buy / hold / sell any stock. Please read the detailed disclaimer at the bottom of the post.

Solvent Extraction: The processing of vegetable oil in commercial applications is commonly done by chemical extraction, using solvent extracts, which produces higher yields and is quicker and less expensive. The most common solvent is petroleum-derived hexane. This technique is used for most of the “newer” industrial oils such as soybean and corn oils.

Oil Seed crops are second most determinant category of crops for our agricultural economy, post cereals. The self-sufficiency in oilseeds attained through “Yellow Revolution” during early 1990’s, could not be sustained beyond a short period.

Usage of Oilseeds : Usage can be broadly divided into 2 categories –

Global oilseed production has been growing at ~3.2% CAGR since 2006 and has reached . 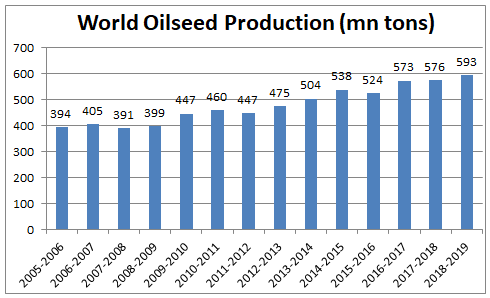 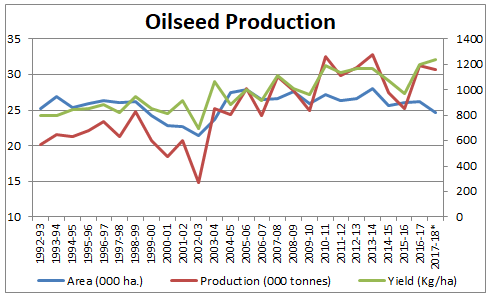 Global Oilseed Production Over Time Based On Types Of Oilseeds

Soybean is the most produced oilseed globally.

Oilseed Production Over Time Based On Types Of Oilseeds In India

We can see how over the last decade Sunflower oilseed production has consistently reduced and remaining oilseeds also haven’t seen any significant growth. 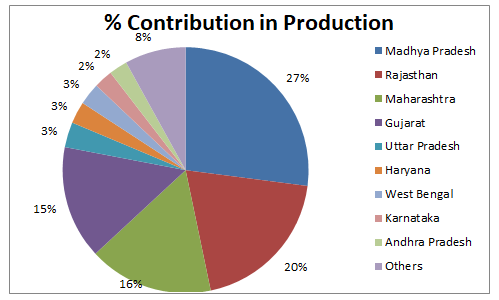 Breakup of Production Based On Oil Type

Palm oil forms a major share of the edible oil consumed by Indians, with second most consumed oil being Soyabean Oil. Together both sum up to ~65 % to 75 % of our consumption. 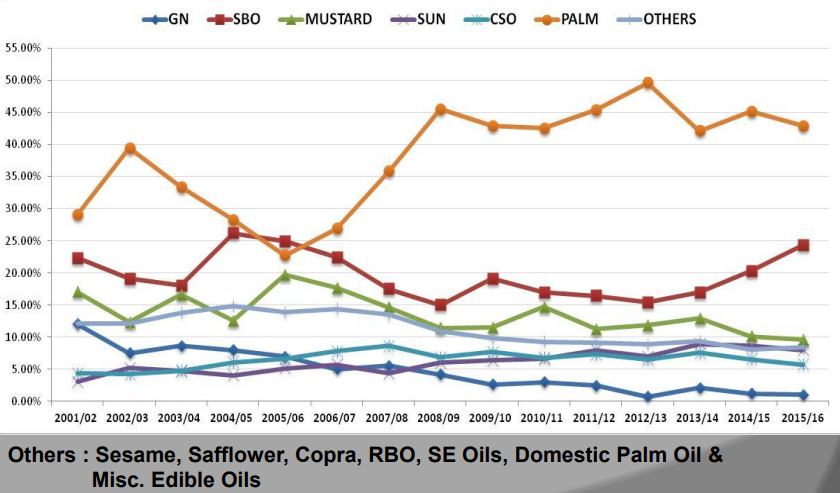 Edible Oil consumption is somewhat higher in Western India and lesser in Southern India, however more or less it’s proportional to the population distribution. On comparative basis, Palm oil is not much favoured by North India, whereas South India has preference for Sunflower oil and they are lesser inclined towards Soybean oil and Mustard oil.

Supply And Demand Of Edible Oil In India

Major part of our Edible Oil demand has been supported by equivalent increase in imports. Since 2012-13, out of the 6 mn tons of incremental demand has parallely seen 5 mn tons of import increment. At the same time, import as % of demand has increased from 55% to 59%. 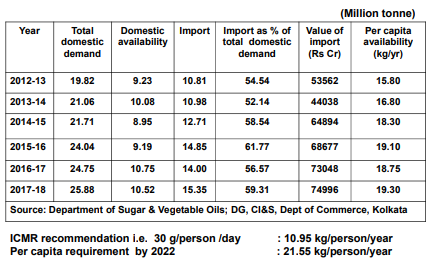 Import Of Edible Oils In India

Indian edible oil import has grown at 8.4% CAGR over last decade. Broadly, the portion of refined oil in the imports has been ~15% of the total imports. The remaining crude (non-refined) edible oil imported is refined in local units. The existing duty differential between CPO (crude palm oil) and RBD (refined, bleached, and diodized) stands at 7.5%, which provides protection to domestic refiners against competition from imported refined oils to certain extent. 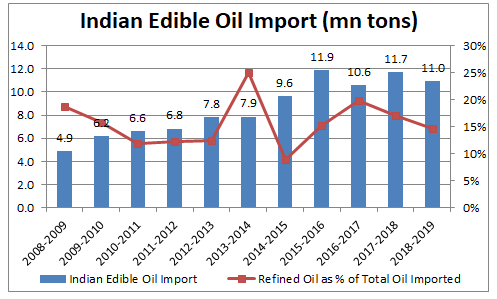 Palm oil has been the main edible oil imported in India. Off lately, Soybean oil imports have also increased sharply. 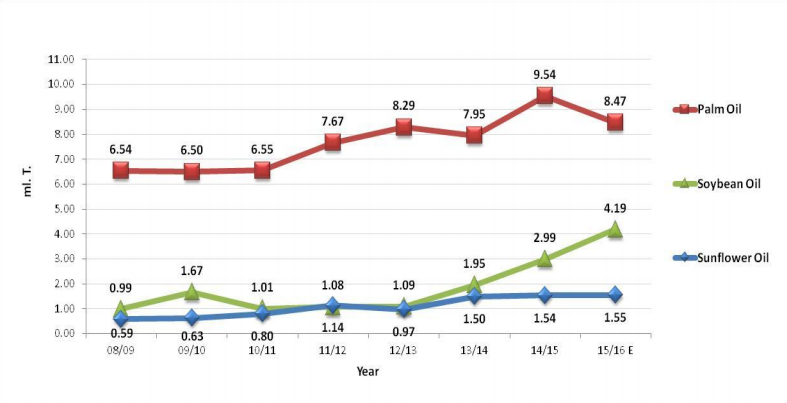 Vegetable oils form over half of the total Agricultural import in India. Despite being the 5th largest oilseed crop producing country in the world, India is also one of the largest importers of vegetable oils today. Our Edible Oil import bill comes at around Rs. 70,000 cr annually! It is one of the low hanging fruit for the government to improve our forex reserves. 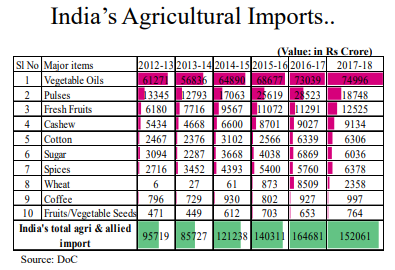 At the same time, it forms very miniscule part of our exports 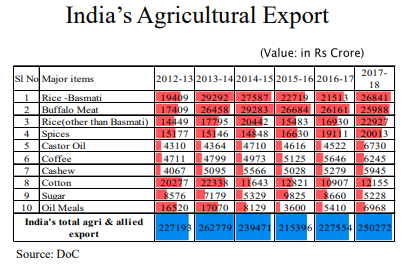 Due to this heavy import of edible oil, the existing Indian mills are operating at very low utilisations. 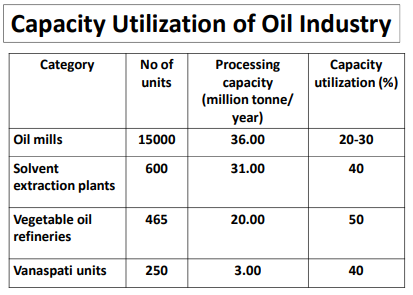 We can see how import duty has decreased dramatically for all types of oil from ~70% to existing 15-20%, which has made importing edible oils even more viable. 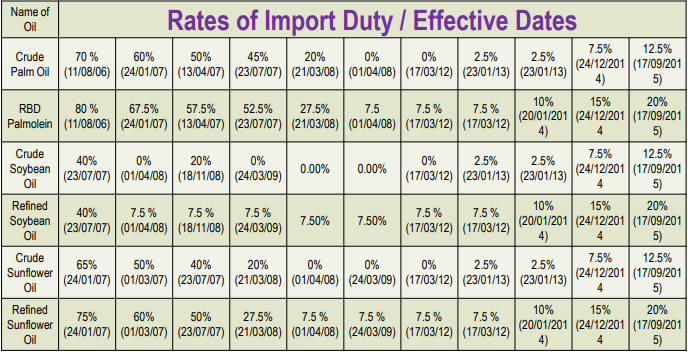 What Happens If We Improve Our Farm Yields? 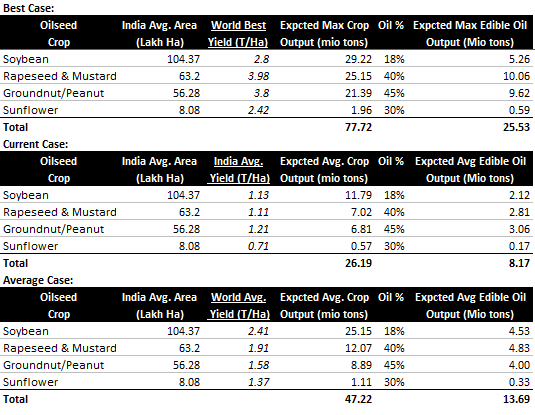 Constraints for increasing oilseed production are as following:

It is a meal made from the residue of pressed oilseeds, most commonly used as animal feed or fertilizer

Export of Oilmeal has reduced off lately. 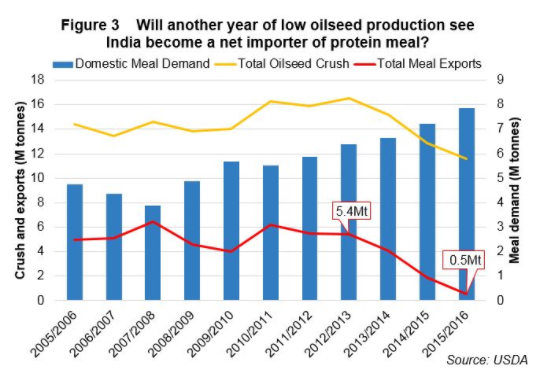