Ethanol is a very key by-product for integrated sugar mills. On an average, 10.8 lt of Ethanol can be produced from 1 tonne of sugar. B-Heavy molasses have better yield of Ethanol (explained in detail later on in the article) than the molasses currently used for Ethanol production.

Ethanol is blended in the fuel to reduce the dependence of the country on crude imports generally, and also ethanol is a cleaner fuel. ‘E20’ is a term to express 20% blending in the fuel.

To understand the potential of ethanol, let us have a brief look on the Brazil sugar industry initially, which is considered to have the world’s first sustainable biofuels economy.

Brazil has a sugar production of ~40 mn tonnes and consumption of ~10-11 mn tonnes. Most of the sugarcane grown is used to manufacture ethanol for domestic gasoline blending and sugar for exports.

Past 4 Decades Of Brazil Sugar Industry 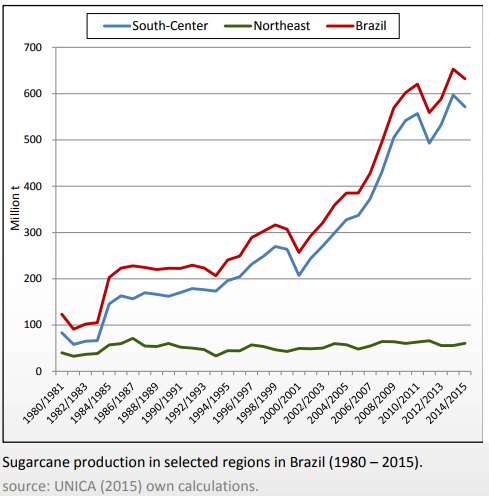 We can see a similar trend in vehicular fleet in Brazil. Due to rise in oil prices around 1975, the Brazilian government introduced ethanol based vehicles from 1980s, which were pretty much in demand, but started getting replaced by gasoline vehicles around 1990 (probably because of stabilizing of oil prices). However, there was again huge jump in usage of flex-fuel vehicles post 2004-2005 after another rise in oil prices, and the flex-fuel fleet count has kept on rising in Brazil since then. Brazil has increased the E20-E25 flex fuel fleet by over 5 times from 4.6 mn in 2007 to 26.2 mn in 2016, and parallely reduced gasoline vehicles from 15.1 mn to 9.7 mn in the same time period. 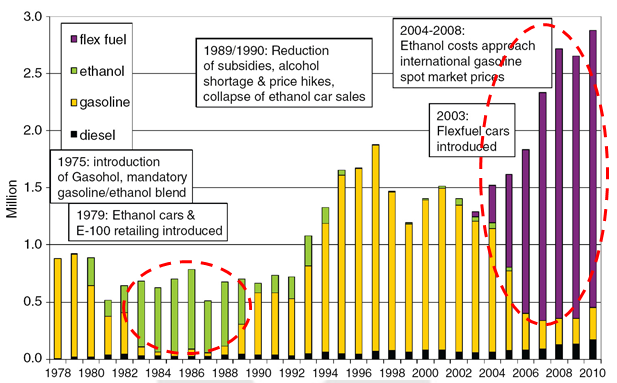 The corresponding movement in oil prices can be seen below: 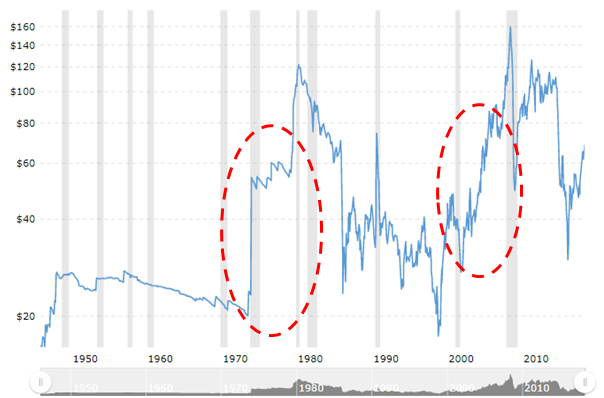 To encourage growth of ethanol based fuel, the Brazilian government took following steps:

Other factors which benefited the growth were:

Less than 50% sugarcane is used for sugar production since 2000, with remaining sugarcane used for ethanol production. The share of sugar from sugarcane over past 15 years can be seen in the following chart: 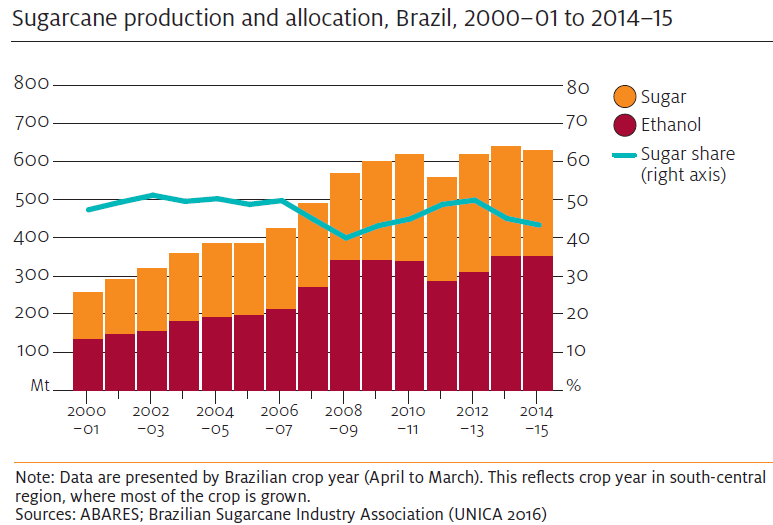 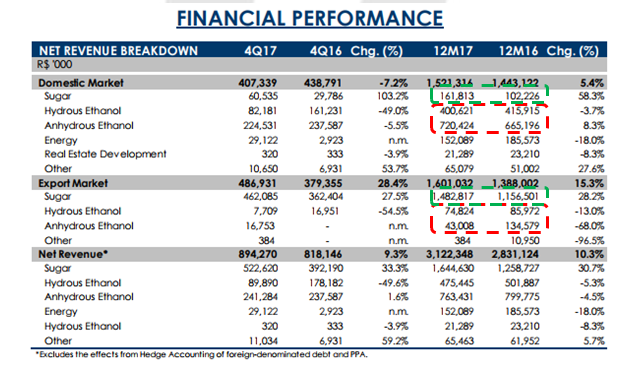 India imports 70% of its annual crude petroleum requirement (~110 mn tons). At 10% blending of Ethanol, 313 cr litres of Ethanol is required. Additionally, 1 mn tons of sugar can be replaced by 60 cr litres of ethanol. However, currently there is no policy to convert sugarcane directly to Ethanol. 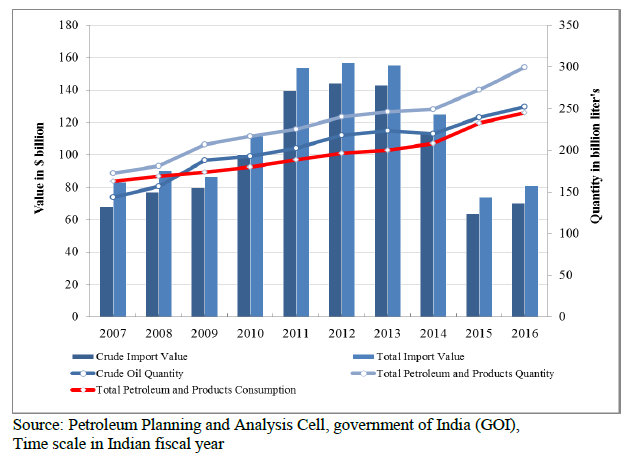 Ethanol capacity breakup based on private and cooperative companies is as following:

140 cr lt of blending has been finalized by OMCs for 2017-18, which is highest ever done. At 140 cr lt of ethanol, the blending would be ~4.5%, which is still way lesser than the targeted 10% blending which would require 313 cr lt of Ethanol. In 2016-17, OMCs achieved a blend of only 2.3% against the mandated 5%. However, the 140 cr lt (4.5% blending) being the highest ever blending proposal, there are hopes that going forward higher ethanol blending targets might be successfully achievable.

1st generation (1G) biofuels are made from sugar and vegetable oils; whereas 2nd generation (2G) biofuels can be manufactured from lignocellulosic biomass or woody crops, agricultural residues or waste like rice & wheat straw, cotton stalk, etc.

Ethanol also can be extracted via B Heavy molasses route to get higher yield of ethanol per ton of sugarcane. Conventionally, sugar is extracted in 3 stages, with very little sugar left to be extracted after the 3rd stage. Left over after the 3rd stage is the molasses, which has very lesser sugar content left, and this molasses is processed in a distillery for ethanol generation traditionally.

As per the B Heavy Molasses route, the sugar extraction process is stopped after the 2nd stage extraction and the molasses post 2nd stage which are still rich in sugar content are used for extraction of ethanol. B Heavy molasses has Ethanol yield of over 300 lt per MT of molasses, whereas the yield of current molasses produced post 3rd stage is 230-250 lt per MT of molasses. Additionally, this process leads to overall ~2% reduction in recovery of sugar. This can serve 2 purposes: 1) Blending of the fuel by more ethanol; and 2) Conversion of extra sugarcane to ethanol rather than sugar which helps to solve the issue of oversupply of sugar during the years of overproduction of sugarcane.

As of now there is no policy in place to extract ethanol from B Heavy molasses. Also, the B heavy route is not possible from current distilleries. However, minor capex on existing distilleries would make them capable of extracting ethanol via B Heavy route.

The Union Cabinet, chaired by the Prime Minister Shri Narendra Modi has approved National Policy on Biofuels – 2018 in May’18. The key points of the policy as are following:

The Indian government has made many announcements recently to boost the ethanol blending and save the import bill on crude imports. This would also include introducing new vehicles supporting higher blending and also vehicles running 100% on ethanol.

With recent rise in crude prices, it makes even more sense to increase the blending of fuel with bio-fuels and to save on higher crude prices. In the current scenario of over production of sugar in India and on global level, it is a win-win situation to produce as much of ethanol as possible for India and Brazil, and simultaneously lower the production of sugar. As we can see in the above graphs, it is exactly what Brazil has done when crude prices have sky rocketed over past few decades.