Disclaimer: The Blog on ‘VSAT Industry’ is not a recommendation to buy / hold / sell any stock. The published post is for information purpose only. Please read the detailed disclaimer at the bottom of the post.

How Does It Work?

The satellite in the sky sends and receives signal from an earth station that acts as a hub. Each user of the VSAT is connected via the hub to the satellite in a star topology. For each user to interact with one another, each transmission has to first go to the hub station which then re-transmits it via the satellite to the user at the other end with a VSAT. 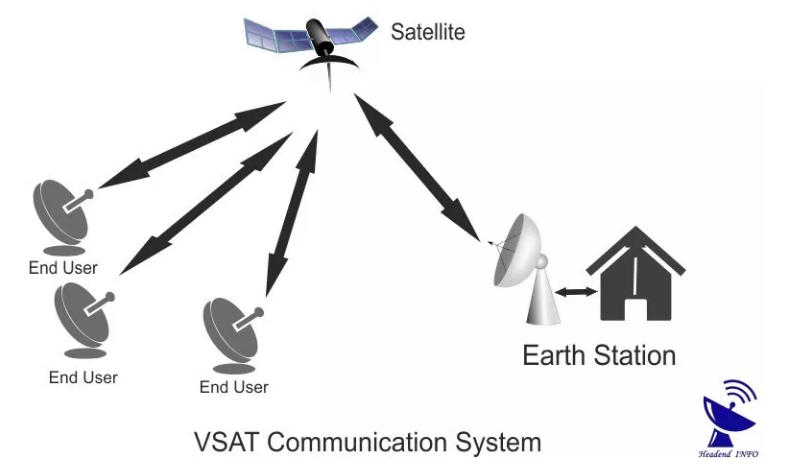 VSAT provides satellite based telecommunication and internet access to companies and individuals. For business the biggest advantage is the controls over their network which otherwise they have to rely upon third parties.

Most widely understood use of VSAT would be the service provided by direct TV. Customers pay to have the terminal installed at their homes and subscribe to the network to gain access.

VSAT also finds extensive application in military and naval where it provides uninterrupted communication even the remotest areas.

ATMs installed in far off places are governed via the VSAT devices installed on the roof of the ATMs and the receivers installed at the Bank premises. Currently there are about 115,000 ATMs connected on VSATs, which number is likely to grow to around 200,000 in the next 4 years. Anywhere reliable, stable, narrowband and broadband communication is required; VSAT networks can be a great solution.

The Govt. also plans to have complete automation and real-time monitoring of approximately 55,000 outlets of Oil Marketing Companies (OMCs) in the country by March 2019 to reduce adulteration and diversion of fuel, provide transparency to customers on the daily fuel rate and enable digital transactions linked to dispensing system.

Reaching to Citizens across the Length and Breadth of the Country –

The Govt. plans to extend the reach of its services to the remotest parts of the country with the use of digital technologies, social media, mobility, analytics and cloud are enabling Digital India by providing “governance and services on demand” and “digitally empowering citizens”. Along with the public sector, the private sector will play a significant role in improving digital connectivity in the country by providing the last mile access, location specific Wi-Fi access (e.g., schools, public Wi-Fi) and development of applications that provide on-demand cloud-based services such as branchless banking, remote health, remote education, skill development and e-justice.

The Govt.’s initiative to develop one hundred ‘Smart Cities’ is powered by technologies like Internet of Things (IoT) which will help the citizens in services like transport system, parking, electricity, waste management, water management and women’s safety, smart health services, smart manufacturing and smart agriculture, etc. This has a potential to open newer opportunities for various sectors.


Landscape of VSAT Industry in India?

VSAT services are regulated by the department of telecom (GOI). As per the regulations, VSAT operator is required to lease out transponder space only from ANTRIX Corporation which is the leasing arm of ISRO.

VSAT operators are required to set up Hubs in the country which act as intermediary between the satellite and the numerous VSAT devices spread across the country. The technology for the entire VSAT chain is proprietary, only a handful of global players have the technology manufacture the devices used in the hubs and the standalone VSAT devices installed at various locations. The VSAT devices and the hub electronics have to have similar providers for it to function. There is not Indian company making either the VSAT devices or the hardware used at the hubs.

There are 5 main VSAT operators for this business in the country, with diverse backgrounds ranging from pure play VSAT operators to large Telecom operators, private sector to PSU enterprises, domestic players to foreign operators. There has been no new entrant in this space in the country in more than a decade so far. The industry has been growing at around 8% p.a. so far.

VSATs can become the most preferred means of communication in the B2B segment in rural India as it can offer competing services in urban India at competitive prices.

VSAT has a large potential for new services around mobility – Maritime Communication, Aero in-flight connectivity and Surface transport communication services. These services have not been offered in the country so far due to regulatory restrictions. However, with the new licenses for offering mobility services using satellite communication being framed by the Govt., these services will soon be a reality in the country and will help in expanding the VSAT industry. The Company has been pursuing with the Govt. for considerable time for the necessary regulatory clearances for offering aero in-flight connectivity and maritime communication services in the country and plans to launch these services as soon as the necessary clearances are given. The Company believes that the VSAT industry in India will grow multi-fold in the next 4 – 5 years’ time once the licenses for offering the mobility services are issued.

Market share trend over the last 10 years tell us that only one player which is NELCO or previously known as Tatanet Services is able to grow and win market share. In 2009 NELCO had 8% of the market and after 10 years it has 21% market share in the industry while others have seen contracting market share like Hughes, HCL Comnet, BSNL and Bharti Airtel. This trend in market share exemplifies that the Industry is under constant pressure and faced head winds all last 10 years.

In 2017, India touched peak VSAT numbers at 279,161 and in the subsequent year 2018, the overall market contracted to 273,161 VSATs. In the last 10 years 2018 was the first year which saw contraction in the absolute number of VSAT units installed in the country. Even in a tough year 2018, NELCO (previously Tatanet Services) grew its VSAT sales by 4,400 units and touched an absolute VSAT number of 58,136. Various other players saw contraction in the incremental sales in 2018 while NELCO grew winning market share and now caters to 21% of the market in 2018 which was 19% in 2017.

How Has Satellite Growth Fared in The Most Wired Nation?

26% of the US households are beyond the reach of terrestrial broadband. The US market also happens to be the largest market for satellite broadband, one reason for this huge market for VSAT is the geographical spread of the US. Countries like Australia have also realized that while; it is easy to connect the highly populated areas through fiber and other terrestrial wireless means, for connecting the low population density areas, satellite are the best alternative.

United States with a population of 300 plus million has over 1.4 million VSAT users and these many users access internet via satellite.

NELCO strengthened its presence in the banking and finance segment and offshore oil and gas segment. It deployed close to 7,500 VSATs for offsite ATMs and bank branches during FY2017-18. NELCO expects the deployment of VSATs across bank branches and ATMs in rural India to go up during 2018-19 and beyond.

The PSU OMCs will continue to connect their retail outlets using VSATs and more than 20,000 such outlets are likely to get connected during 2018-19

Company is pursuing for the permissions from Govt. of India to offer the aero and maritime communication services in the country and believes that the permission would be given during the year 2018-19.

The market potential of these two services is estimated to be more than 1000 Crore per annum by fifth year, of which the Company expects to get a fair share.

Why Isn’t VSAT Industry Growing As Much In India?

Today it is viable to provide satellite based broadband connectivity of 256 Kbps at a CPE cost of INR 40,000 and a per month recurring charge of INR 500 to the rural masses. Newer satellite in Ka band is becoming a reality and they pack more than 100Gbps per satellite. These satellites when available in India can significantly reduce the bandwidth cost (comparable levels to fiber costs).

Indian VSAT providers are dependent on limited number of technology providers for hardware.

Expansion and spread of terrestrial telecom infrastructure to remote areas poses a threat to VSAT industry along with 4G services.

Foreign rate fluctuations can impact the profitability of the VSAT players because VSAT hardware is imported. The transponder space in the satellite is provided by ANTRIX (ISROs Arm) but the contracts are in foreign currencies.

Any major change in the Govt. regulations pertaining to Satellite communication and/or VSAT services could also pose a threat. Mobility services like aero and maritime communication are dependent on Govt. giving the necessary approvals.