Disclaimer: The Blog on Indian coffee sector is not a recommendation to buy / hold / sell any stock. The published post is for information purpose only. Please read the detailed disclaimer at the bottom of the post.

Coffee plant is woody shrub that is grown in subtropical and tropical climates. Coffee beans are seeds of this plant. There are two major types of coffee: Arabica and Robusta. Arabica coffee is generally considered superior to Robusta. About two thirds of world production is Arabica and one third Robusta. From planting, it takes three to five years before the coffee plant begins bearing cherries. This long lead time can create periods of supply-demand imbalance, as farmers plant coffee when prices are high but then do not produce a crop for several years, by which time circumstances may differ. 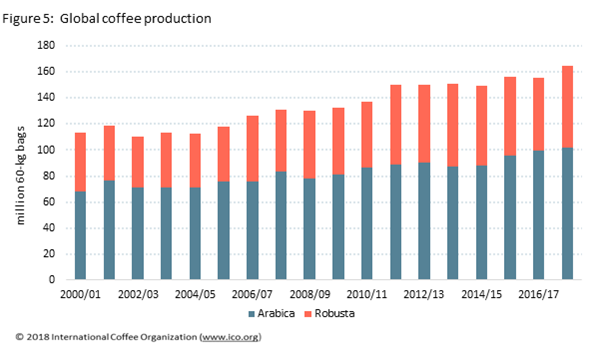 Coffee beans are seeds of the coffee plant. Processing a coffee bean requires many stages of processing before it can be brewed into a cup of coffee. Coffee cherries are either plucked by hand or machine. The purpose of processing is to separate the coffee bean from the cherry and dry it.

In second stage of processing we have two methods:

Dry method involves laying the coffee cherries in the open sun and letting them dry out. The seed or bean is later separated by a process known as hulling.

The wet method involves the usage of water and seed or bean is separated from cherry before drying. Wet method of separation produces higher quality and therefore higher priced coffee.

Almost all Arabica coffee is processed by wet method.

Next step in coffee processing is roasting. Roasting brings out the flavor we like in a coffee.

Roasting generally takes place in the importing country because once roasted the coffee beans begin to lose their freshness. Importing nations will always have captive or domestic roasting facilities for coffee.

Coffee is produced in approximately 70 countries, but the world’s largest coffee producer by far is Brazil. This makes the price of coffee sensitive to weather conditions in Brazil.

Coffee touched its low in the year 2002 when Arabica and Robusta were priced at 60 and 30 cents per pound and this happened due to oversupply of coffee in the world market. 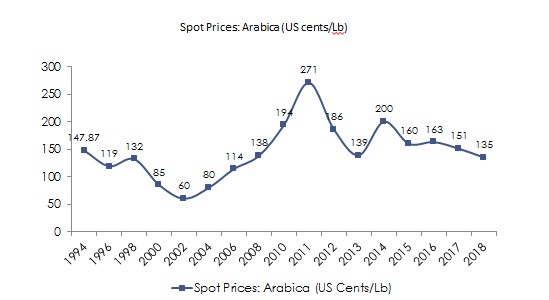 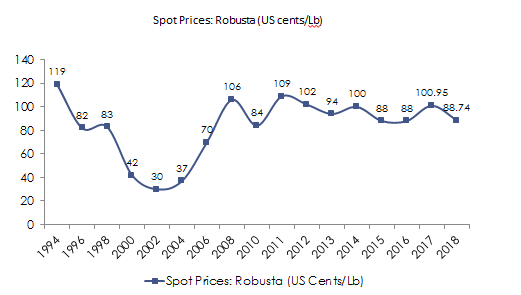 Coffee Prices again made a new peak although short lived this time in the year 2010-11 when there were concerns about supply in Brazil and Columbia and it was followed by aggressive speculator activity.

It is no surprise that growing Arabica coffee is dragging Indian coffee sector behind when it comes to optimally utilizing its resources  (land and labor). 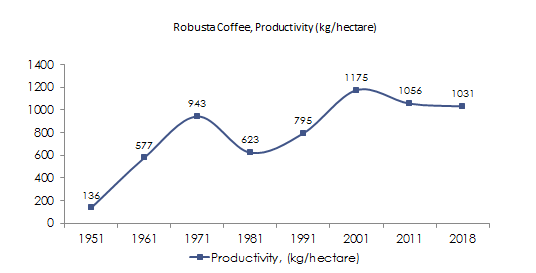 Although Kerala has the marginally low soil productivity at 774 kg’s per hectare but it has comparative advantage versus Karnataka and Tamil Nadu in terms of labor utilization. Kerala employs an aggregate ~44,000 people in its coffee farm lands but at a unit level in terms of coffee produced per labor, Kerala has the highest productivity at 1.5 tons of coffee production per labor.

Coffee producers in Kerala will see operating leverage kicking in when coffee prices rebound as there operations are less labor intensive versus coffee producers of Karnataka and Tamil Nadu.

Mechanization proves to be a major challenge considering the undulating terrain that coffee is grown on. Much work needs to be done in this area.

In Brazil where coffee is cultivated on a flat terrain, mechanization is employed successfully where a single worker covers 100 acres.

However kerala has the lowest labor density per hectare and per ton of coffee produced therefore the blended labor cost would be lower for companies growing coffee in kerala.

Allanasons pvt ltd is the biggest exporter of Arabica coffee from India and its export volume for the year 2018 stand at a staggering 10,719 tons or ~28 Million USD worth of exports of Arabica coffee.

India’s largest market in volume terms is the Italian Market and that too for Robusta coffee and so far this year, India has exported 70,438 tons of coffee beans to Italy and of the total export of coffee beans, Italian exports stand rock solid at 23%.

Other major export destination after Italy are Germany, Russia and Belgium

Striking observation in the table is that of Belgium which imports a staggering 7,770 tons of Arabica coffee from India dwarfing other export destinations.

Bulk of the Indian Coffee production is exported and the domestic industry focuses much of its marketing effort on export promotion. There are signs that the popularity of coffee is increasing with the spread of foreign and home grown coffee shops. However, exports continue to siphon large amounts of coffee away from domestic market and consumption estimates are largely unchanged in recent years.

While the coffee consumption is increasing moderately, it can be difficult to establish a repeatable trend given the industry emphasis on exports, especially when the export demand is high.

Tea continues to be the hot drink of choice for many Indian consumers. Consumers in southern India, where much of India’s coffee is produced, consume more coffee than in other areas of the country. While there is a small but growing cafe culture. 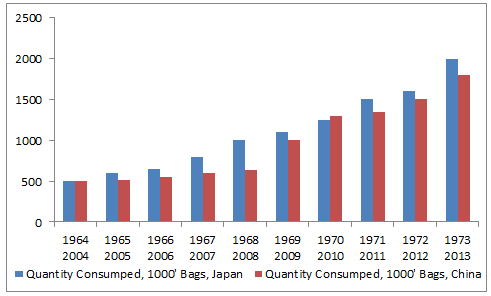 Rapid increase in coffee consumption in China particularly from 2005 to 2013 can be compared to a similar trend in Japan from the years 1964 to 1973. For japan, it took 30-40 years total to become a recognizable coffee consumer and become the worlds fourth largest coffee consumer, China on the other hand, is still in premature stages of coffee development.

Today China’s coffee sector is valued at $4.72 Bn and Starbucks dominates the sector with 58.6% market share. Starbucks operates 3,400 cafes with each store generating $800,000 of sales per annum. The starbucks management has a target to have 6,000 cafes by FY22.

Global Per Capita Consumption Of Coffee 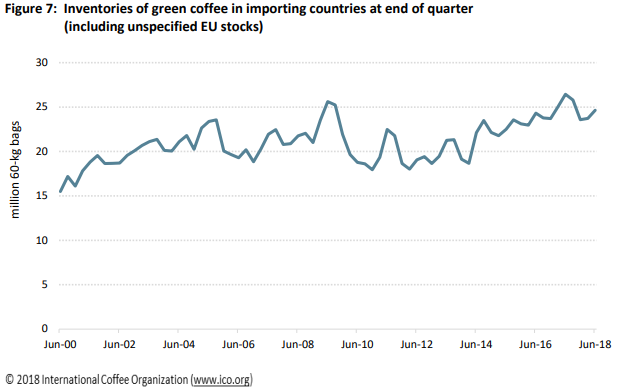