Disclaimer: The Blog on ‘Coal And Power In India’ is not a recommendation to buy / hold / sell any stock. The published post is for information purpose only. The intention to share write ups on this blog is to create a repository of ideas so that investors can have a look at various frameworks & approaches. Please read the detailed disclaimer at the bottom of the post.

Current Landscape of Power in India

Currently the PLFs of the domestic coal based power plants in India are low, which implies lower profits, this has happened because India witnessed growth in supply of power plants at an unprecedented level between 2011 and 2016, the supply of power grew at 14.5% in the period. 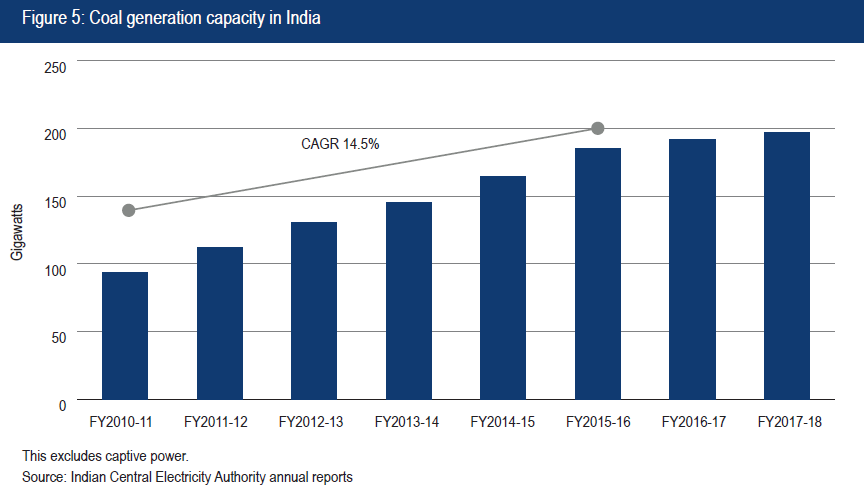 India has become a nation with surplus power and this has led to lower PLFs in our thermal power plants. 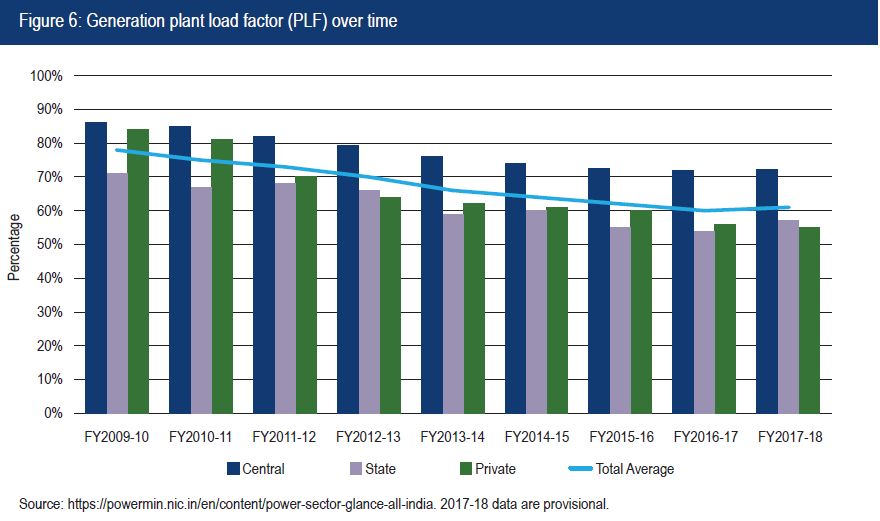 
The PLFs dropped further due to the push of the 2014 elected government to increase power generation via Renewable Energy.

More power dispatches started to happen from the RE sources which displaced conventional coal based power.

Currently India has ~40 GW of idle power it has no PPAs signed with the DISCOMs or it is in the IBC-NCLT. These newer plants were built mostly by the private companies which are now stuck because they don’t have PPAs or FSA (Fuel Supply Agreements) from Coal India.

Even though we have surplus of power, we see load shedding in our towns, why so? One of the reasons for load shedding is reluctance of DISCOMs to purchase power during the time of the day it is needed direly because it is expensive power. Because the PPAs signed by DISCOMs are on a cost plus basis, the power rates rise quickly when India demands more power (evenings).

And the consumers are not generally billed by the ‘time of the day’ policy.

CIL is not able to match with the demand for coal in India. There are two broad headwinds to this

CIL finds it difficult to open new mines to increase volume because of policy paralysis in India.

These headwinds have led India to import coal which has made a hole in our foreign reserves and increased our trade deficit.

Form the surface various coal types look the same but there are different grades to coal depending on its calorific value, ash content, etc) and power plants are built to burn a specific grade and these power plant consuming a specific type of coal cannot burn a different coal type.

This has led to power plants built on our coastal lines import dependent. They will not be able to burn domestic coal even if they want to because of grades differences.

Even if the specific grade of coal suitable for our power plants built at the coastal belt is mined in India, then you have the high logistic expense (domestic) which brings the FOB price of imported coal at parity with the domestic coal.

Cost of coal mining depends far more on the quality of the mine than on operational management. If coal is deep underground, then mining it will be more expensive.

CILs more profitable subsidiaries are those with the best quality mine, meaning, they require the least amount of OVERBURDEN removal.

Even if the private players are allowed to mine coal, we will most probably see a situation where the mines to be put on auction will be of low quality (more over burden removal) which will increase the cost of mined coal and subsequently the cost of power for coal based power plants.

Indian railway derived 44% of its 2018 revenue from coal logistics and coal forms 40% of the tonne mile for Indian railways. In the recent past Indian railway has not shied away from increasing tariffs for CIL because freight revenue collected by the railways cross subsidizes the passenger logistics.

If railway does not increase tariffs on coal and various other commodities it carries then it will find it difficult to run passenger operations. 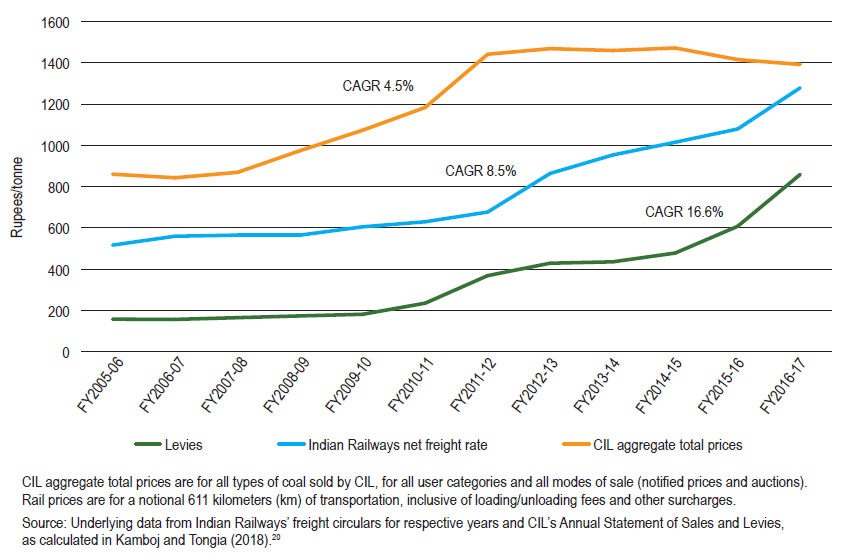 CIL has been conservative and has not taken a hike in coal prices like it partners have (Indian railways and GOI), CIL hiked coal prices at 4.5% CAGR over the study period while Indian Railways net freight rates and Levies of GOI rose by 8.5% and 16.6% respectively.

Recently a lot of the power plants have complained of wagons not being available for coal logistics. Indian railway has been on a back foot for a number of years on increasing the wagon count and very recently it has come out with a order for 22,000 wagons and order of this magnitude has come out after a period of 5 years.

Coal logistics also gets choked between destinations because we do not have dedicated freight corridors, very recently we have seen GOI investing into DFC and they various DFC plans are either under construction or in planning stage. 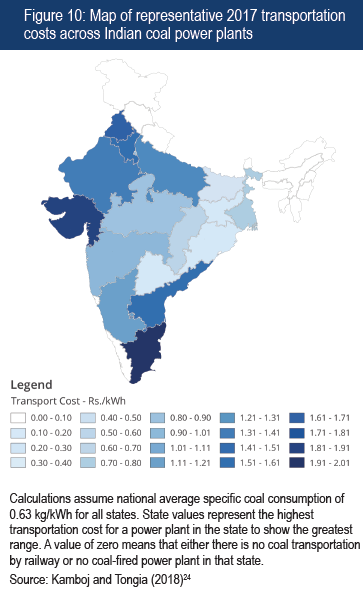 All these head winds add to the woes of our energy sector, as an example, Punjab also has power plants and it receives coal from far off mines which are ~2000 KM away, this augments the coal cost per ton for the far off plant, the coal transport cost can be as much as INR 2/kWh for Punjab, which then passes on to the DISCOMs as the PPAs signed by the DISCOMs are on a cost plus basis.

Levies and Their Significance

Domestic coal is subjected to all sorts of levies such as 14.5 % royalty fee + 5% GST + mineral development fund charges.

Some of these levies are on a per ton basis and not on calorific value basis and we already know that domestic coal has lower calorific value vs imported coal and charging levies on tonnage basis disproportionately increases the cost of lower grade coals for the Indian power plants.

Significance –Jharkhands 7% annual budget depends on payments made on coal levies. Jharkhand has to become a state which is less dependent on coal levies, for it to reduce levies on coal.

By 2030, the report expects the coal demand growth to peak but until then it will not slow down. if we are able to increase the PLFs of the existing plants, we can meet the rising demand for power from existing plants and if the FSA and PPA issues get resolved then we can also witness fresh investments in the sector.

Newer plants will be constructed on super critical boiler technology, so that the coal conversion efficiency can be enhanced. India will most likely move to a ‘Time of The Day’ regime for equitable division of power and we will also see declining AT&C losses.

Policy has made it mandatory for the power plants to be able to modulate output to 55% of the capacity in response to grid conditions, particularly at times of high RE (renewable energy) availability.

Older plants will become less competitive and will need to invest into upgrades which will make the power costlier, therefore betting on companies which have newer plants make more sense versus power companies with older power plants.

Older plants have limited remaining life span and lower PLFs will mak it more difficult for them to recoup the cost of these mandatory technological upgrades.

However, stakeholder of these older power plants have asked for more time to comply with these norms and the deadline has been extended to 2022.

India will continue to have troubles in acquiring land parcels for constructing new plants and open newer mines and we will continue to loose time and money on getting approvals (ESG). What India needs is productivity gains, if CIL can extract more volumes of coal from the same mine, which will require bigger and better earth moving equipment’s.