Did the Indian economy really grow due to early nineties liberalisation? Well, they surely did, but was it the only growth driver (as people keep mentioning it)? Or there were other important factors, which grew the Indian economy? Well, let’s find out.

What is part of India Uninc (Non Corporate Sector of India)?

We can define Uninc. or the non-corporate sector as those non-corporate entities which belong to non-agriculture and non-government (departments and non-departmental enterprises) activities. It excludes company forms of organisations in the private sector and also in the public sector. It consists of partnership/proprietorship forms of organizations and other self-employed persons like barbers, cobblers, carpenters, plumbers, electricians, commission agents, cycle-rickshaw pullers as also chartered accountants, architects, lawyers, priests, etc. Co-operative forms of organisations, which are not under the government, are also part of this. For tax purposes, the non-corporate form of organizations could be individuals, proprietorships, partnerships, HUFs, etc.

The non-corporate forms of organizations are major players in activities like manufacturing, construction, transport, trade, hotels and restaurants, business and personal services.

The non corporate sector in India is the largest contributor to the national income, savings & investments and taxes & accounts for the largest share in manufacturing & service activities and employment. Yes, it is a victim of the myth of superiority surrounding the corporate sector.

India Uninc. contributes ~45% of the national income of India, which by far, surpasses the corporate sector’s contribution of around 15% and yet its contribution remains unacknowledged.

Virtually, the whole agriculture sector is unorganized. Below table reflects the share of different sectors like agriculture, the government, and the private organized and unorganised sectors in the national income of India measured as a percent of Net Domestic Product (NDP)

One needs to also understand that the unorganised sector is only a large subset of the non corporate sector. So, we can conclude that the share of the corporate sectors is less than 22.9% as the private sector also includes non-corporate organisations.

In terms of the manufacturing sector, the unorganised sector contributes 35% to 40% of the total manufacturing in the Indian economy.

It is also observed that non-corporate sector dominates services activities, which in turn, constitutes nearly two thirds of the Indian economy. Whenever, the term ‘service sector; is mentioned, the immediate recall is the IT sector and companies like Infosys or Wipro. Factually, all software related activities come under business services, which is about 5% of our national income of India. The service sector covers a much larger canvas, and this is the fastest growing sector in the Indian economy, generating scope for large-scale employment. 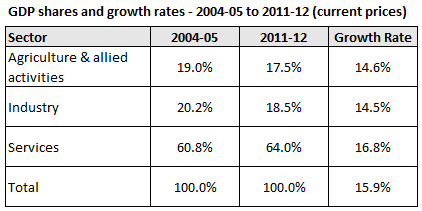 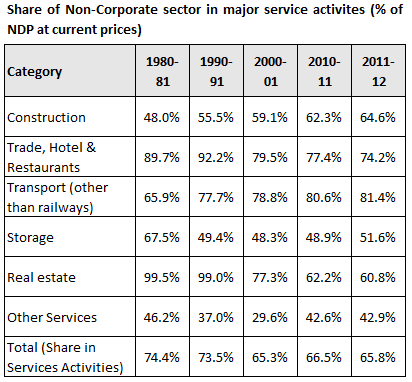 Let’s now take a look at the share of unincorporated firms in national savings. These non-corporate sector firms are considered as households in the savings data prepared by the government of India. In the sixties, our savings rate used to be around 8% to 10% and the theory of the vicious cycle of poverty, namely, a low savings rate implies low investment, and hence, low income which, in turn, once again leads to low savings rate etc., was made popular using India as an example. From the eighties, India’s savings rate has shown a significant increase and moved up to the region of around 20% to 24% and in the last decade (2001 to 2010) it grew to become more than 30%. The single largest contributors to our India’s savings are the household sector.

This phenomenal increase in national savings has been achieved through the efforts of the household sector, which constitutes more than 70% of the national savings. This savings rate of households is without taking into account investment in gold by the household sector since that is considered as consumption by our government economists. (if investment in gold is included then, the savings rate will be higher by 2%)

In spite of the noise made about the importance of foreign investment in the Indian economy, Its found that foreign investment role is less than 10%. FDI/FII in Indian economy is like pickles to curd rice and not the main dish. However, the logic for the importance of foreign inflows in the Indian economy can be summarized as follows. If India plans to grow at 10%, then it requires nearly 40% as the savings rate, since incremental capital output ratio (ICOR) is nearly 4. India’s national savings rate is around 32% and hence we need to strive to get foreign inflows to bridge the gap. However, instead of foreign inflows, the government should take steps to reduce ICOR which would lead to a high growth rate with lower capital.

The situation is no different when it comes to employment. Self-employed constituted more than half of the workforce in India in 2001. 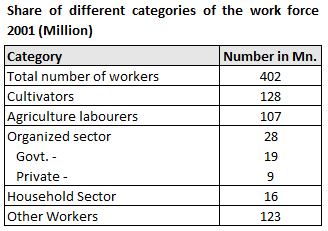 More than 85% of our working population is self-employed or contract and partial employed. Less than 15% are government or private corporate sector employed. But all discussions revolve around this 15%.

In spite of the significant share of household in savings and national income, non-corporate sector’s share in credit off-take has declined from 58% in 1990 to 36% in 2011. In other words, commercial banks have turned away from self employed groups.

Clearly, credit available from the banking sector is not adequate for India Uninc. as banks are more focused on the corporate sector and investing in gilts. However, non-banking financial services organizations have emerged as highly resourceful credit delivery channels for unorganized sector. More than 70%  of the financial requirements of the non-corporate sector in trade and manufacturing are met by non-banking sources. More than 45% of private construction activity is financed by the non-banking sector. The financing of the household sector needs special attention as it is a major portion of our economy.

However, caste has played a very important role in the consolidation of business and entrepreneurship in India, particularly in the last fifty years or so. The enterprise survey (conducted in 1998 and 2005) revealed that 90% of enterprises in India were self-funded. Most of it is likely to have come from informal caste network. The number of establishments financed by financial and non-financial institutions was only 4%.

Taxes and other expenses:

The perception that India is an under taxed economy is a myth if one considers the endemic issue of under-coverage as well as corruption in the system. The share of taxes (both direct and indirect tax) was around 17% of GDP of India. But they do not consider the payments (corruption and bribe) to be made to government employees for carrying on any activity, and to extend, it is said that the bribery given to government officials stands around 6% to 8% of GDP of India.

Additionally, unlike developed countries, the Indian government does not provide any social security to its citizens. Nearly, 90% of the Indian population is not covered by any social security for their old age. Individuals in India, have to depend on their own savings or joint family support (which is also seen in a declining trend) in old age. Not only that, the family has to save for the education of the children, which has become very expensive. Then, there are also health care expenses.

The way forward for the Indian economy:

The global economy is undergoing significant changes with a large part of the west in terminal decline. Many major areas of their ‘economic assumptions and models’ have failed. Banks are in crisis and so are the markets. Western society is in turmoil with ‘nationalization of families’ and privatization of business. Old age care, single parent care, child-care, health care etc. have all become the responsibility of the state and in many places, the state has broken down. The entire west is on the cusp of change with violence threatening their peace due to the many austerity measures that have been imposed.

The late eighties saw the fall of the Berlin wall and the demise of the ideology of Marx which was a dominant ideology for several decades in countries like the USSR and China. But that era has ended. The era of markets is also showing signs of decline with substantial scandals and wrong practices in LIBOR fixing to FOREX manipulations to tax havens.

It is required that India go beyond Marx and markets and think up a paradigm which accommodates the primacy of families and communities. India is a relationship-based society and to destroy it to make a full rule based society may not work. India is an adaptive society since Indians are heterogeneous. India needs to re-work the idea of India to suit their own ethos and thousands of years of culture and civilization. We all carry a heavy burden on our shoulders since India needs to show a third way to the world in the coming decades.